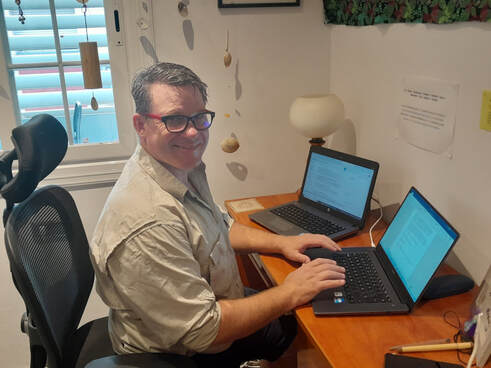 Will has always had a love and a fascination for nature but had to leave school when he was 16 years old to work and began his trade as a bricklayer. Longing for adventures he left Australia when he was 22 to travel around the world (England, USA, Guatemala, Mexico) but when he returned to Australia at the age of 24 the path of his life was changed dramatically when he suffered a severe car accident in which he had his right leg amputated at the hip, suffered a traumatic brain injury and was in a coma for almost 6 weeks. His love for nature and his aspiration to inspire others gave him the strength to keep waking up each morning.

​After many years of searching for his path, he moved to southern NSW and worked alongside farmers tending sheep, cattle, grain and horticulture, whilst at the same time completing a Diploma of Organic Agriculture at Riverina TAFE.  This hands-on experience and study inspired him to do a Bachelor of Ecological Agriculture at the Charles Sturt University and a Bachelor of Science at the Southern Cross University with a specialisation in Regenerative Agriculture. He has written his published thesis on the role of Certification in the organic industry and recommendations on how Regenerative Agriculture should approach certification differently.
Will wants us to consider that nature is our most valuable business partner and that the environment is subsidising the current cost of food and that how we approach agriculture and grow our food can be a game-changer for farmers and for the surrounding community. He will be speaking about certification, and how it has shaped organic agriculture in Australia and what lessons (good and bad) can be obtained from studying the path that the organic certification has taken.  He believes that there are many lessons for the agriculture industry and farmers that can be learned from the organic industries past choices and challenges moving forward in this uncertain environment.

​In his talk, Will will share what he learned from his interviews with farmers, industry leaders and businesses in Australia regarding their views on how the industry of Regenerative Agriculture should move forward and what “do’s and don’ts” can be gleaned from analysing certification and the current Organic Industry.  His conversations with key informants opened up many cans of worms which are relevant to anyone interested in certification and agriculture in general.

The discussion will be about Organic Certification and its timeline and the influence it has had over its history specific to Australian Agriculture.  Over time organic certification has had a significant impact on Australian Agriculture, in a positive sense and a negative sense. There are a lot of lessons that the industry can take when choosing a path of certification. Including the pitfalls to be also avoided. The study was information analyzed from interviews of experienced auditors, certifiers, scientists, and farmers.

Will is working with Southern Cross University and the Soil CRC researching to assess certification for soil and whether that is something to pursue in the future.

Currently, Will is in Spain representing The Organic Matters Foundation in setting up a unique and practical 'Soil School' for small to medium farmers (which represent about 90% of the farmers there) and supporting their transition to regenerative farming practices, including understanding nutrients, building the soil, capturing water, and working with nature.